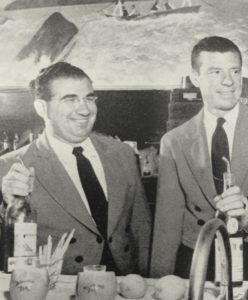 Whaling Bar (1949-2013), although not tropical tiki, La Valencia Hotel’s nautical-themed bar did serve cocktails in coconut mugs! Has anyone seen one of these elusive Whaling Bar mugs?

The bar stood side-by-side with Cafe La Rue in the hotel, and was decorated with nautical antiques from whaling vessels from the 1880s, and murals by painter Wing Howard, who modeled them after old Currier & Ives lithographs.

Bartender Pat Torano worked there for years before opening up his own steakhouse (Torano’s) in La Jolla in the 1950s. And later, Rey Arcibal became revered for his famed cocktail ‘The Whaler’ — a potent shake of brandy, creme de caçao, Kahlúa, triple sec, Bailey’s and vanilla ice cream.

The Whaling Bar was demolished for the expansion of Cafe La Rue in 2013.

The Whaling Bar before it was demolished for the expansion of Cafe La Rue, 2013.